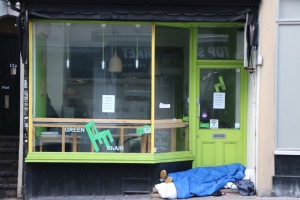 Twenty five years ago, those ending up on the streets were usually care leavers, ex-military, women escaping violence and abuse, people with mental health problems and/or addictions.

Today the picture is almost the same. Only the numbers are greater, and there is a new group: those becoming homeless because of the end of assured shorthold tenancies and the lack of alternative, affordable homes.

There is a perception that the numbers on the streets has grown significantly over the last three years. I don’t believe that to be the case.

The recent count of rough sleepers suggested a 100% increase in their numbers over twelve months. As Cllr. Clare Moonan, who is leading the work in the City Council to end rough sleeping in the city by the end of the decade…